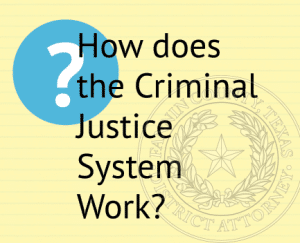 The following is an outline of how a typical criminal case progresses through our system in Fannin County, Texas (USA). If you are in a different state or country, criminal cases may be handled very differently because procedures and terms vary from jurisdiction to jurisdiction. Please consult your local prosecuting authority to learn how your local case would be handled.

When a crime is committed ….

Most reported crimes are investigated by the local police, the county sheriff or the state police. A few types of crime (e.g., criminal non-support, public health-related crimes, etc.) may be investigated by other agencies. 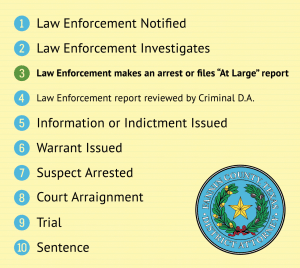 Step 3: Law Enforcement makes an Arrest or files an “at large” report

When a crime is committed in a police officer’s presence — or he has probable cause to believe that certain misdemeanors or any felony was committed that he did not see happen — an officer may arrest a suspect on the spot without an arrest warrant. The officer will later submit a report if an arrest was made or will file a report “at large” where the defendant had not yet been arrested with the Criminal District Attorney’s Office, suggesting potential charges to be authorized.

Most felony cases are discussed with the reporting law enforcement agency during a meeting between the Criminal Investigation Divisions of the agency and our office. Our office will either accept the felony cases at this time or request that further investigation be done before the case is accepted. At this time many of the misdemeanor reports are handed directly to our department as well. Misdemeanor cases are also dropped off with our department at other times and other agencies bring or deliver their felony and misdemeanor cases to our department as well.

This is generally the first time that the Criminal District Attorney’s office is involved in a case, unless someone from our office has reviewed a search warrant or visited the crime scene. At this stage, the Prosecutor determines whether a person should be charged with a crime and, if so, what the crime should be (police do not issue charges — prosecutors do).

An Assistant District Attorney (ADA), working at the direction of the Criminal District Attorney, must thoroughly review all reports and records concerning the case, including witness statements. The ADA also reviews the suspect’s prior criminal or traffic record. Occasionally, the reviewing ADA may send the case back to the law enforcement agency to conduct additional investigation or request supplemental information be obtained.

Informations are charging instruments used in misdemeanor cases to allow the County Courts at law to obtain jurisdiction of both the case and the defendant. The Criminal District Attorney can issue a charge on an Information if she/he reasonably believes that probable cause exists that the suspect committed the offense. But, most District Attorneys apply a higher standard — whether she/he reasonably believes that she/he can prove the charge beyond a reasonable doubt at trial with the information known at that time.

Indictments are the charging instruments used in felony cases and may only be obtained by a presentment of a felony case to a Grand Jury. The Grand Jury is comprised of 12 citizens of Fannin County who will hear and act upon the cases presented by the Criminal District Attorney’s office.

When the Complaint or Indictment is filed in the County Court at Law (Complaint) or in the District Court (Indictment) the Judge then signs a warrant — an order to bring the defendant before the court.

In many of the cases, a bond had previously been set by a Magistrate or a Judge and the defendant posted bond and is out of jail awaiting the disposition of the case in Court. In that instance, the defendant will continue on bond unless for some reason the Judge increases the amount of the bond or revokes the bond for failing to abide by the conditions of the bond.

Step 7: Suspect Arrested (if not already in custody)

The delay between the date of the crime and the defendant’s arrest after indictment or the filing of a complaint can take any length of time. Example: If the defendant’s whereabouts are unknown, or if he/she has left the State of Texas.

A notice of the warrant is placed into the various law enforcement agencies databases and the defendant may be arrested on that warrant anywhere including out of state. 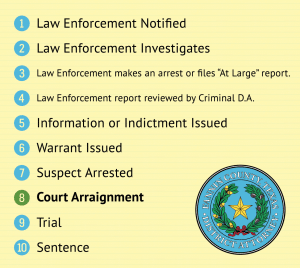 This is the first court appearance for any misdemeanor or felony. After the defendant is charged by complaint or by indictment, the defendant appears in either the County Court at Law or the District Court for arraignment.

At arraignment, the defendant is told what the charge(s) is (are) the maximum penalty if convicted, and is advised of his constitutional rights to a jury or bench trial, appointed attorney, presumption of innocence, etc.

The defendant may waive arraignment in court by filing a document. All further pre-trial procedures are determined by whether the defendant is charged with a felony or misdemeanor:

In all cases, this is the defendant’s second and third court appearance. It is a scheduled meeting between an Assistant District Attorney and the defendant (or his attorney) to determine whether the case will go to trial or be resolved with a plea. These meetings focus on resolving the case short of trial. The Judge and witnesses are not involved in misdemeanor pre-trial conferences. If a plea bargain is going to be offered by the Prosecutor, it is done here.

Many other events can occur prior to trial. Depending on the nature of the case, there may be pre-trial hearings on Constitutional issues (confessions, searches, identification, etc.). The issues are presented to the Court through written “motions” (e.g., Motion to Suppress Evidence, etc.). The judge must determine whether evidence will be admitted or suppressed at the defendant’s trial, whether there is some legal reason why the defendant should not be tried, or decide other ground rules for trial. If the defendant has counsel at this time a discovery packet with information on the case will be made available to the defendant’s attorney.

Both the defendant and the District Attorney (representing the People of the State of Texas) have the right to a trial by a jury. Sometimes, both sides agree to let a Judge listen to the evidence and decide the case without a jury; this is called a “bench trial”.

Sentencing in Texas varies with the crime. The ranges of punishment are set by the State Legislature and sentences are generally at the judge’s discretion.

If the defendant goes to the jury for punishment, the judge will follow the jury’s sentencing recommendations. If there is a bench trial, there is a plea or an election by the defendant to have the Judge sentence him/her. If found guilty by the jury, the judge will consider the information in the pre-sentence report before determining the sentence.

The parties may correct factual errors in the pre-sentence report and offer additional evidence relevant to the judge’s sentencing decision.

The judge may consider different alternatives, such as a fine, probation, community service, a sentence to jail or prison, or a combination. The judge must also order the defendant to make restitution to any victims who have suffered financial harm.

If there is an Appeal:

The defendant files a Notice of Appeal in the County Court at Law or the District Court and the case is then sent to the Sixth Court of Appeals in Texarkana.

The defendant (now called the Appellant) and the State (as Appellee) file briefs that summarize the case facts, frame the legal issues to be decided, and present persuasive written arguments (supported by constitutional, statutory or prior case decision authority).

Either party can request that the case be scheduled before the appellate court judges for oral argument. The appellate court will eventually issue a written opinion (or several opinions, if the justices disagree). Not all appellate opinions are “published” (i.e., printed in official “reporter” services, such as South Western Reporter 3rd). The legal analysis and conclusions in published opinions are given greater precedential authority than “unpublished” opinions.

Additional Information about our Office and Processes: